It's been a while since my last post, so I figured an update was in order. The Summer-Fall newsletter will be ready the last week in September, and should be sent shortly thereafter. If you're not on the mailing list or email list, let me know at sph1@email.com or showard@austincc.edu that you would like to be connected. This year's field season provided a wealth of information to further our understanding of the subsistence patterns along the Allegheny during the Archaic Period. We collected several more carbon samples for dating, so we'll know when during the Archaic the Karl site was inhabited. A new artifact type that hadn't previously been recorded from the site is the netsinker, which will be a featured article in the newsletter. Three of these very simple yet effective tools were recovered during the 2012 season. 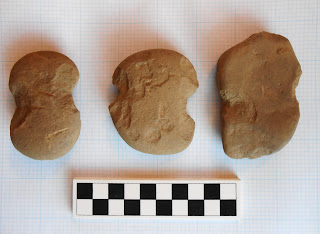 Karl Site netsinkers
Area B, the Stoeckel Tract, yielded additional bifaces as well, including a few types we hadn't seen previously at Karl. Distribution information from the Stoeckel Tract also helps us understand the settlement pattern at the Karl site, revealing two lithic "bands" parallel to the terrace edge, and a small scatter to the east of the main Karl site distribution. Analyses are underway to figure out what it all means.
﻿ 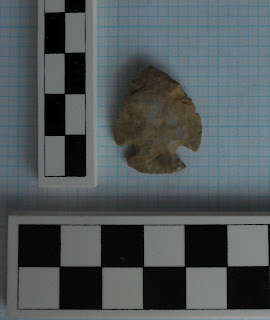 Small projectile point from Area B
Posted by Steven Paul Howard at 10:31 PM


Attractive section of content. I just stumbled upon your web site and in accession capital to assert that I get actually enjoyed account your blog posts. Any way I'll be subscribing to your augment and even I achievement you access consistently fast. capitalone.com